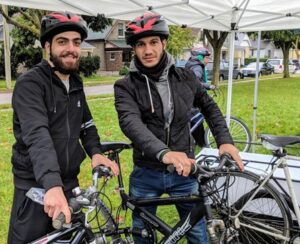 Specific accomplishments in the past for TREA include spearheading its Bike Week in 1991 building on it with a corporate commuter challenge for several years and renaming it TREA’s Bicycle Festival Week. After 30 years, this has run its course and a city initiative for the month of June called London Celebrates Cycling has evolved. TREA also spearheaded London’s first walking/biking map and then donated the map to the city for continued distribution.

TREA also participated on the citywide InMotion Challenge team which ran for several years, the planning committees for two provincial Share the Road Bike Summits; and helped initiate the startup of Car-Free Days in London, the regional Active & Safe Routes to School program (2001) and CAN-Bike London’s (2015) delivery of cycling safety training courses. TREA is also represented on the County and City’s Road Safety Strategy Committee. More recently, TREA has been supporting The Big Bike Giveaway, with recruitment of bike helmets and helmet fits.

Walking and cycling have emerged as vital forms of mobility during the COVID-19 crisis and are a key part of recovery planning.